Should Dogs be Ring Bearer’s at a Wedding?

Vivian Kurutz who is the Executive Director at the Harlem Wellness Center & proud dog owner of Mingus aka “meniscus” as SusieQ prefers to call him was offered to be the ring bearer in Michael & SusieQ’s upcoming wedding! Vivian is one of two bridesmaids in this upcoming! Might we add that Vivian herself did not have a dog in her own wedding! Okay, she did not have Mingus at that time; however, she decided to go with a human versus our popular furry friends.  LOL!

SusieQ is still not sure if Vivian was joking about her dog-gone offer; however, the sanctuary was not open to the idea of a dog prancing down the isle for a ring bearing role! The question still remains, should dogs take on the role of ring bearers? SusieQ & Michael quickly decided to give this non-sexist role to the sister of the bride & Matron of Honor, Simone Elliot’s two daughters.

We have another famous dog owner in the bridal party; Mr. Larry Benjamin who is the best man and brother of the groom Mr. Michael Benjamin.  Larry’s dog (well, his son) is known as Toby the fierce (pictured above in the header image on the right with a sign around his neck). We believe Toby will be staying in Philly while his Award-Winning Author of a father will play a large role in supporting his eldest brother!

Although the bridal party has now been finalized, SusieQ still had to research these dog walking positions to see if they truly exist. See it for yourself! Dogs are really a big part of certain weddings… Just not this one! : http://www.buzzfeed.com/ariellecalderon/dogs-who-make-exceedingly-adorable-ring-bearers#3a0sth1

Chosan’s the Master of Ceremonies 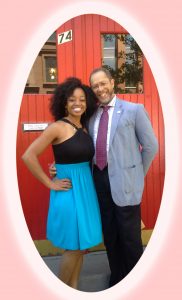